The Apple Q1 earnings were released last night on Apple’s quarterly earnings call. Apple netted $13.1 billion in profit on $57.6 billion in revenue for the quarter. This was pushed by record iPhone sales in the quarter. Check out the full details below on the Apple first quarter earnings that were reported yesterday.

Apple sold 51 million iPhones for the quarter, which is a 6.7% jump in sales year-over-year. Although Apple sold a record number of iPhones in the quarter, the numbers were still below what some analysts were expecting. Many analysts predicted Apple would sell between 54-74 million units for the quarter.

Apple CEO Tim Cook had this to say on the success of both the iPad and iPhone:

“We are really happy with our record iPhone and iPad sales, the strong performance of our Mac products and the continued growth of iTunes, Software and Services. We love having the most satisfied, loyal and engaged customers, and are continuing to invest heavily in our future to make their experiences with our products and services even better.”

When it comes to the iPad, Apple sold 26 million units, which represents a 13.5% increase year-over year. Since the iPad first started in 2010, Apple has now sold 195 million tablets. The company also sold 4.8 million Macs, compared to 4.06 million in the year-ago quarter. iPod’s were actually the only items to drop in sales compared to last year with Apple only selling 6 million units compared to 8 million during the same quarter. 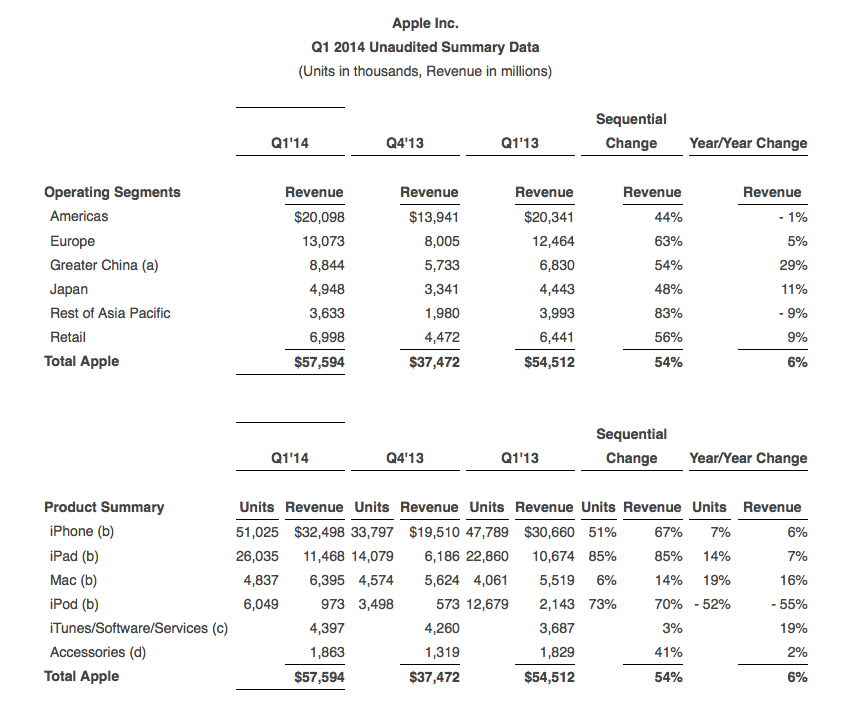 Shares of Apple fell nearly 6 percent after the results were first revealed Monday afternoon despite the broken sales records. Apple finally noted the company returned $7.7 billion to shareholders through dividends and share repurchases during the December quarter. With Apple set to launch new product categories (iWatch, iTV, phablets) later in the year, Apple could continue to break records well into 2015.