Consumers today tend to hold on to their devices longer, presenting device manufacturers with the challenge of encouraging people to upgrade more frequently. This problem also impacts carriers, since they rely on these new devices to boost data consumption among current subscribers.

To combat this issue, new carrier early upgrade plans have popped up, causing a big shift in the traditional ways of carriers. But are they actually a good deal? Back in July 2013, we took a look at the first round of these upgrade plans – but there are more changes to talk about. In this post, we take a look at some of the big changes to these early upgrade plans over the last six months, and how they could impact your wallet.

Lets remember that If something looks to good to be true, it probably is. Looking back at the industry consumers have been purchasing phones with two-year contracts for the past 20 years. This allowed consumers to grab the newest phone for a fraction of the full retail price. In return you sign a contract with your carrier, ensuring that they recuperate the reaming cost of the handset. With early upgrade programs they hook you with a zero down payment, and then bill you with hefty financing charges over two years. The ability to upgrade early is nothing more than a convenience if you can’t wait the full 24 months. Just remember that this convenience will ultimately cost you more at the end of two years and really benefits the carrier and the manufacturer, not the consumer.

Early upgrade plans: Then vs. Now 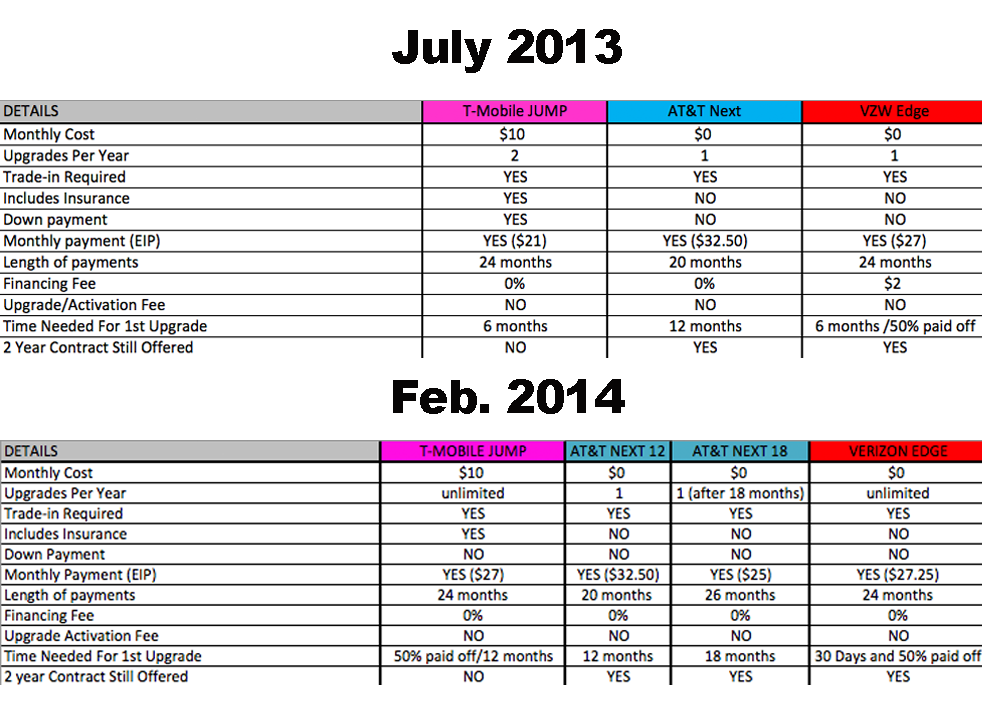 The snapshot: Upgrade plan changes over the past 6 months (Device: iPhone 5/5S)

The very first early upgrade plan was introduced by T-Mobile in July 2013. Called JUMP (“Just Upgrade My Phone”), the program allowed customers to upgrade twice a year, with the first “JUMP” after just 6 months.

The change: Customers can now “upgrade whenever you want,” instead of the 6 month waiting period. Though this sounds promising, customers must pay off at least 50% of the device (1 year of payments) in order to upgrade. T-Mobile has basically changed the “effective” JUMP interval from 6 months to one year. The new plan will kick in on February 23, though the silver lining is that current JUMP customers will not be pushed to the new plan. All the details on the changes can be found at T-Mobile.

Shortly after JUMP hit the market, AT&T was first out of the gate with its “Next” program. When the program initially launched, consumers didn’t react that well to it; the device subsidy was still rolled into the contract, so customers were basically paying for the device twice.

The change: Although the Next plan has not changed much, AT&T is dropping the cost of current plans while pushing current customers into Next. Last month, AT&T introduced the “Mobile Share Value Plan” for families and small businesses, giving both new and existing AT&T customers the opportunity to share unlimited talk and text – and a 10GB pool of data – starting at $130 per month. But new AT&T customers who want to grab the new pricing will need to sign up for Next, bring their own unlocked devices, or buy a device at full price. Worth noting, the Next plan now offers two options of financing – 20-month rates or 26-month rates – translating to a 12-month or 18-month upgrade timeframe. All the details on these changes can be found at AT&T.

Not long after Next, Verizon showed up to the party with EDGE. The plan from Verizon was very similar to that of AT&T, in which you essentially pay for the device twice; needless to say, EDGE was seen as a major rip-off.

The change: The Big Red recently shortened the upgrade cycle on its EDGE plan. Instead of waiting for 6 months to trade in your phone and get a new one, you can do so after just 30 days. Customers are still responsible for paying off half the retail cost on the phone, which means it will ultimately cost you a lot more to upgrade sooner than 6 months. All the details on the changes can be found at Verizon.

Last to the party was Sprint with its One Up plan. Rather than mirroring the other two carriers, One Up followed in the footsteps of T-Mobile, lowering the monthly bill to $65 with the My Way plan.

The change: The nation’s third largest carrier probably made the biggest change to their plan – they canceled it. Sprint has replaced the plan with their new “Framily” plans that were introduced at CES in early January. The “Framily” plan allows subscribers to add friends and family members to the plan to get a price break. The more customers that are added to the plan, the bigger the savings. This type of plan is really about acquiring new customers, not about catering to the frequent upgraders. Think of this as a referral plan that benefits everyone in the “Framily.”

What is my best option now?

If you want the latest and greatest, and don’t have the cash to do so, an upgrade plan could work for you. But remember that it will ultimately cost you more cash in the end, and you will never own the device.

My advice: if it makes financial sense for you, avoid the upgrade plan and the 2–year contract entirely. Pay for the device up front, and when upgrade time comes, trade it in or sell it. This method gives you the freedom to pick your device, pick your carrier, and pick your plan on your own terms, without any carrier blinding you from the truth.

If I had total freedom, here’s what I’d pick:

*Does not include sales tax & fees