Samsung has finally unveiled the fifth iteration of its flagship Android smartphone at Mobile World Congress in Barcelona. The new Galaxy S5 will bring a more premium look, bigger screen and more of Galaxy Note look and feel to the table.

The new Galaxy S5 has shed some of the plastic found in the Galaxy S3 and S4 in favor of some metal and a new textured back. The design looks and feels more industrial than previous models as it edges more toward a Note 3 in terms of looks. The S5 will initially be offered in charcoal black, shimmery white, electric blue and copper gold. 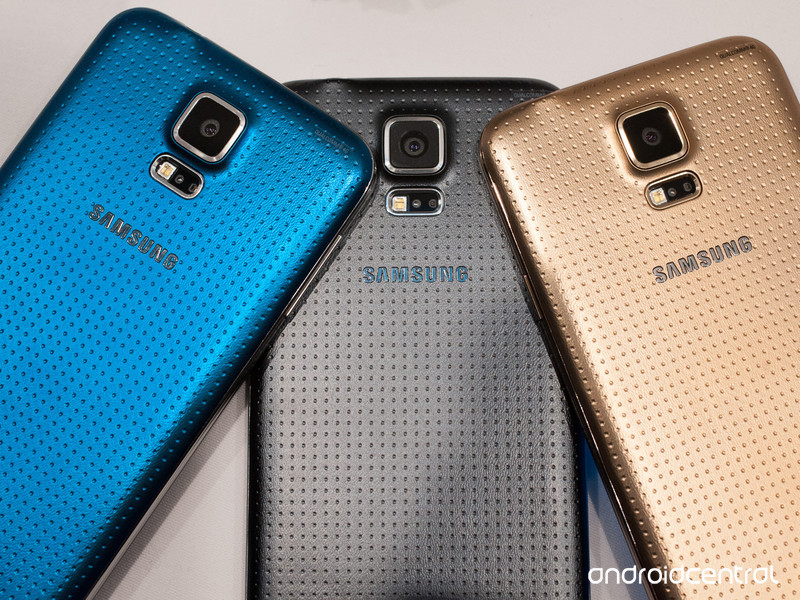 Under the hood, Samsung has given the Galaxy S5 a bigger 5.1-inch screen, Snapdragon 800 chip and 2GB of RAM. The device will come loaded with Android KitKat 4.4.2 and sport a larger 2800mAh battery.

Samsung has also added two new hardware features to the GS5. The new S5 is now water and dust resistant. The device can survive in up to one meter of water for 30 minutes. This feature is something similar what we saw in the Samsung Galaxy Active S4 from last year.

The next new piece of hardware is a page right out of the old Apple playbook. The new S5 features a fingerprint scanner on the home key just like the Apple iPhone 5S. The new fingerprint reader is a “swipe” sensor, which means that it may not be as accurate as the one found on the 5S. Samsung is currently in talks with PayPal to a bring new payment feature over to the scanner.

Samsung is also introducing new features to S Health, with meal tracking and new nutritional information stats. The S5 can also keep an exercise log and mapped runs for those looking for the ultimate workout phone.

The Galaxy S5 will be available worldwide on April 11th. Pricing for the device has not yet been announced. I would expect the new phone to start at around $649 at full retail, and $199 on a 2-year contract. Here in the US the device should hit all major carriers just like the S4. AT&T, Sprint, and T-Mobile each today confirmed that they would offer the S5 when it goes on sale in April. The carriers did not share exact sales dates or pricing for the device, however.

Die-hard Samsung Galaxy S fans will view the new S5 as the best Galaxy device to date. The bigger screen, more powerful processor, 16MP and fingerprint scanner make it one of the best phones currently on the market. But are these features worthy of an upgrade? Current Galaxy S4 owners may prefer to wait out their 2-year contract as the S4 is already one of the best phones in the business.

At the end of the day, many Android fans that were hoping for a more premium looking device,  may feel a bit let down. Devices like the new Sony Xperia Z2, LG G Pro 2 and upcoming HTC One 2 all sport similar specs but all offer a better look-and-feel over the Galaxy S5. Although the new Galaxy S5 represents the very best from Samsung, it may not be the very best Android device currently available.