Gazelle’s Guide to Water Damage: The Truth About Rice, the Galaxy and Everything

You’ve probably heard a story similar to this one: “My cousin’s phone died after it fell into the toilet, but he put it in a container of rice and now it’s fine!” You’ve probably also heard the best way to prevent water damage after dropping your phone into a lake (or just about any other liquid) is to put it into a container of dry, uncooked rice. Conventional thought says the rice will suck the moisture right out of the phone and restore it to life. Hey, I read it on a blog… it must be true!

We wanted to find the truth about rescuing drowned phones, so we gathered nine devices slated for recycling and put popular wisdom to the test. What we learned surprised us, and may have you running to the store after you read this.

NOTE: If you JUST dropped your phone into water, follow the instructions in our “What to do right now if you drop your phone in water” article to give your phone its best shot at survival.

What were we trying to learn about water damage?

1. If your phone gets wet, what is the absolute best way to recover it?

2. Is rice really the best household substance for drying out a drowned phone?

3. What are my chances, doc? Be honest – will I ever make a call again?

What did we do to test this?

To answer these burning questions we conducted several tests, all in the name of science! 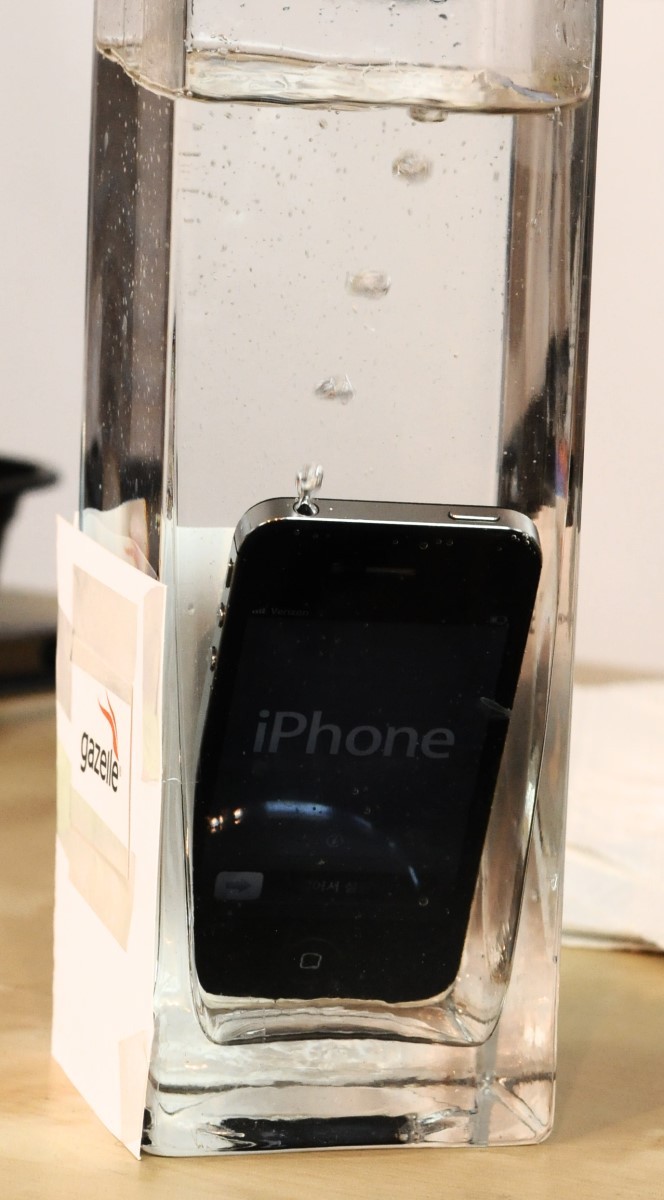 We tested five Samsung Galaxy S IIIs, three iPhone 4s and one iPhone 3GS. Two of the Galaxies went dead the moment they hit the water. The remaining three turned off after a few seconds in the water. The iPhones seemed to do much better. All of the iPhones emerged from the water still running, with no evidence of damage… yet.

We dried the phones as best we could using paper towels. We removed batteries and parts (when we could), and shook the phones to get as much water out as possible. Then, we placed the phones in drying agents such as rice and silica gel for the weekend.

On Monday, were excited to get to work (seriously!) to see if any of the phones had survived. To our surprise, the iPhones faired the poorest despite continuing to run so well under water. Only one of the iPhone 4s worked and it showed significant water damage under the screen. The other two iPhone 4s and the iPhone 3GS were completely unresponsive.

Given their spectacular failures in the dunk test, we expected the Galaxy S III smartphones to be a lost cause. We were flabbergasted when every single one started right up without any sign of water damage.

Where does the water go inside the phone?

Before the test, we placed water-contact indicators inside the phones to see how far the water got into each phone. When we opened them up to see the results, the Galaxy smartphones surprised us again. Every water sensor had been completely exposed, so the phones had been entirely flooded, but had dried out and recovered.

The iPhone 4 smartphones were a different story in water. The two dead phones weren’t even dry when we opened them up. It appeared that water had been trapped around and under the battery and under various pieces of electronic shielding.

The iPhone 3GS was the only phone that wasn’t completely flooded. The water sensors near the top of the phone (close to the earpiece) were still bright white when we opened it up. But it was dead nonetheless.

So, is the iPhone or the Samsung Galaxy better in water?

We were impressed by the resiliency of the Galaxy smartphones. The removable battery probably contributed to the improved drying and higher survival rate. It is also possible that the relatively open design of the phone’s housing allowed water to escape and/or evaporate more readily.

The iPhones were a disappointment in water. The lack of a removable battery is a minor annoyance under most circumstances, but in this case it proved to be the primary point of failure for two of the iPhone 4s. The compact nature of the iPhone may also have inhibited draining.

We wanted to see if rice is really all it’s cracked up to be. We tested six common household materials to see which could absorb the most water from a wet sponge in 24 hours:

Rice is most definitely not king

Dry, uncooked conventional rice was the worst of the seven options we tested. It absorbed the least water in 24 hours, losing out to silica gel, cat litter, couscous, instant oatmeal, classic oatmeal and instant rice.

More importantly, the sponge that we left in open air performed far better than any of the drying agents. It’s possible that the absorbent materials could have matched open air if we’d used a lot more. But it seems that leaving your phone on a shelf may be the best option.

So, what can increase the chances that my phone will survive water?

We recommend focusing on shaking, blowing, or vacuuming as much water out of the phone as you can before trying to dry out your device. You should only rely on drying agents such as silica gel or rice to absorb the last few drops of residual moisture.

If you absolutely must save your phone or data, your best bet is probably to open the phone up as soon as possible and leave it in front of a fan. Most phones can be opened with a Philips screwdriver, but the iPhone requires a specialized “pentalobe” screwdriver, which can be purchased on eBay or from iFixit.com. Don’t worry about voiding your warranty by opening the device– it ended the moment water entered your phone and tripped the water damage indicator.

Once you’ve gotten as much water as possible out, silica gel or instant rice may be helpful, but only if you use a large quantity. We’d suggest at least 4 cups, and a container that’s at least 1-2 quarts. Don’t waste your time with conventional white rice. And if you don’t have silica gel or instant rice, don’t worry. Leaving your phone in open air, (perhaps with a fan for better air circulation) works just as well.

If you’ve drowned your phone and there’s no getting it back, head on over to Gazelle’s Certified pre-owned site for a replacement smartphone. Your drowned device is probably still worth some good money, so trade that wet phone in and you can use the cash to help pay for a new one – or a waterproof case.

Want to know more? Download our technical write up for all the technical details you can stand. We know you miss your science lab report book from middle school and… science!

This is unarguably the best article I’ve seen on ways to save your gadget. As a retired communications professional, the tip I can add is biggest key to success is the speed at which you get your gadget OUT of whatever you dropped it into & get it shut down (and preferable battery removed). Remember, swimming pool water, whether a salt water pool or a chlorine pool is very caustic when it comes to electronics. Submerge it in clean, clear, cold water and rinse, rinse, rinse. Follow the recommendations in the article for drying it out. Get to it fast & it definitely can be saved.

Forget the rice and silica. It has to touch the water to absorb it Take the battery out immediately. If. You can’t get to it, turn it off and open the case if you can. A quick dunk in denatured alcohol will absorb the water, and is easier to evaporate. Put the phone in a durable sock or cloth bag, and swing it with a cord or rope for a minute. High centrifugal force. Gently dry with hairdryer. Presto

just now I droped my cell phone in my bath tub.
first I rushed to get the battery out as fast as I could, then I started taking it apart quick as I could, get the screws out it’s a cheep 30 dollar LG phone but I still rushed to get it apart and the back off of it.. then put the peaces into the rice and blew on it for 10-30 min with a hair dryer set to hot then cold then hot at some points just heating the bowl it was in at some points the device.

one thing I noticed is the phone has two main points that must get absolutely that the rice didn’t get too on it’s own and that is between the screen and the “motherboard” I put the rice between it and still had to blow dry it to get it completely dry to touch..