Two years ago, a Kickstarter campaign promising to convert an iPad into a laptop raised over 800% of its initial target of $90,000. The Brydge, a hinged Bluetooth keyboard intended to meld with Apple’s finely machined aesthetic, was born. The keyboard is designed for use with second through fourth generation iPads. It turns those machines into clamshell quasi-PCs, “iPad Laptops.” Brydge positions its keyboards as Apple-inspired and “worthy of your iPad.”

Propagated by the likes of Asus and Microsoft, the concept of tablet/PC hybrids is patently un-Apple. Tim Cook voiced his aversion to the convertible category during his October 2013 Apple Keynote when he stated that Apple’s competitors “are confused…trying to make PCs into tablets and tablets into PCs.” Despite Cook’s naysaying, the clicking of a traditional keyboard is much more satisfying than the weak haptic feedback of a virtual one. Brydge’s relative success indicates that the market might agree. 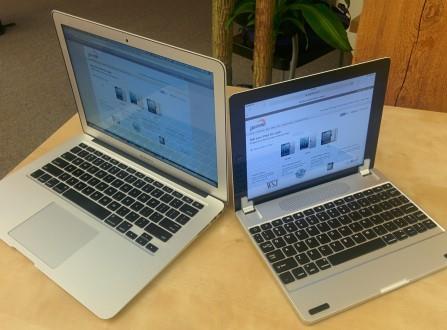 Although it’s a couple years old, the Brydge+ is worth a second look. In March, the superior iPad 4 was resurrected to replace the incumbent iPad 2 as Apple’s mid-range tablet offering, meaning more people may be buying new, Brydge+ compatible iPads in need of accessories. Additionally, Brydge recently dropped keyboard prices by over 20%. The price drop may herald the coming of an iPad Air-compatible Brydge keyboard but, in the meantime, the folks at Brydge sent the Gazelle Lab an example from the current Brydge iteration for review, an aluminum Brydge+® iPad® Laptop + Built-in Stereo Speakers. Three models of Brydge+ are currently available: the Brydge+ with Speakers ($150) which is highlighted in this review, Brydge+ Speakerless ($140), and a less expensive Brydge+ Polycarbonite ($100). 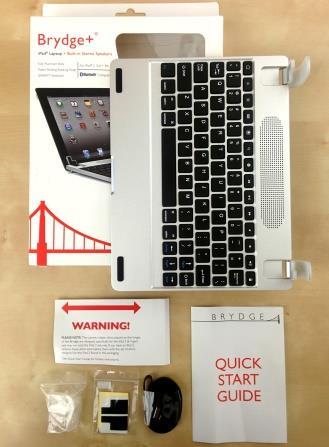 The look, the feel

Brydge went to great lengths to Apple-ize their keyboard, even mimicking minute details like the hallmark, “Designed by Brydge in California Assembled in China” on the bottom of the device. The overall result is a product that impresses at a distance, but falls short of Apple’s unparalleled build quality upon closer examination. The Brydge+ is made of anodized “aerospace grade” aluminum that does a fine job of matching the shade of the iPad’s housing; however, it’s not brushed like that of the iPad and lacks the iPad’s silkiness. The seam running around the underside of the keyboard is noticeably wider at the corners than along the edges—a machining flaw that would be insignificant if Brydge hadn’t invited comparisons to Apple manufacturing. Four rubber feet underneath the Brydge+ prevent slipping and two identical rubber bumpers suspend the screen safely above the keyboard, but I’m led to question the durability of the feet by the fact that spares are sold in a “Rescue Pack” on the Brydge site.

The form, the function

The Brydge+ uses friction to physicallyconnect to the iPad and Bluetooth® to pair wirelessly. Two rubber shims stick into each hinge and cradle the tablet snugly in place. Each Brydge comes with two sets of shims for the two supported form factors, aswell as a warning against using incompatible shims. Once I connected my test iPad—an iPad 2—to the Brydge+, I gave it a few good shakes and dangled it upside down. The keyboard stayed securely in place. When attached to a Brydge keyboard, the iPad can be tilted nearly 180°, offering plenty of viewing options. The snugness of the connection and the wide range of viewing angles allowed the iPad to reach its true potential as Netflix-in-bed delivery method.

Except for a cramped left shift key, the keyboard itself is comfortably laid out. I was able to type within a few words of my average laptop words-per-minute after a few minutes familiarizing myself with the Brydge+. The keys did feel stiffer than I would like and I noticed occasional letter-dropping when I didn’t apply a significant amount of pressure when typing.

Brydge touts the built-in speakers as “a huge improvement over the limited iPad speaker,” but it’s difficult not to feel that the speakers were added as a mere margin-boosting upsell feature. The current $10 price difference between the speaker and speakerless models indicates either a lack of demand for the speaker-toting version or very inexpensive speaker components, or both. The Brydge+ speakers were marginally louder than the iPad’s, but also treble-heavy and grating. 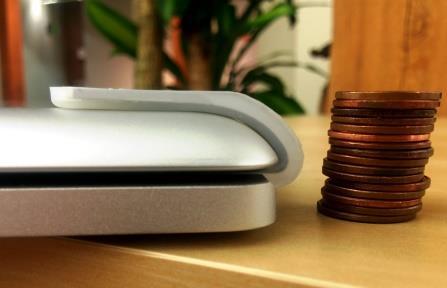 There is a slew of other iPad keyboards available. The Clamcase Pro provides a similar laptop-like experience and also prescribes to a machined aluminum aesthetic. Unlike Brydge, the Clamcase protects the iPad housing with an outer shell, but such protection does come with additional bulk. At 1.7 pounds, the Clamcase is about six ounces heavier than the Brydge+. Other popular cases, Zagg’s Zaggfolio and Logitech’s Ultrathin Keyboard Cover are thinner, lighter keyboard options; however, they each have only one viewing angle and both look very much like a third party accessories.

All told, the Brydge+ is not spectacular. Brydge takes cues from Apple’s aesthetic, ease of use, and, unfortunately, over-pricing. The result is a tolerable, if expensive, product that doesn’t quite live up to Apple standards. If Apple wanted into the convertible game (yet) and created an iPad keyboard dock of its own, I’d guess that the Brydge would turn into something like a high quality knockoff. That said, if you’re shopping for a keyboard, it’s lighter than the Clamcase, and offers more viewing angles than other competitors.

Despite its shortcomings, if mobile applications cover your productivity needs, the Brydge+ just might be the pieces of hardware you need to wean you off a traditional computer and de-clutter your desk. Joined to an iPad, Brydge+ does resemble a full-fledged MacBook Air. In fact, while reviewing the Brydge, someone approached me to ask “What is that crazy*** laptop?”