How to Avoid a Broken iPhone Screen

Lurking around every corner is Mr. Mishap, attempting to break your most sacred and fragile iPhone part – your screen. We’ve all had that paralyzing moment when your smartphone slips out of your hand, halting time as it plummets to the ground. You can try to catch it, block it with your foot to slow its fall or, at least, hope the phone’s strength will endure the rapidly approaching the ground. 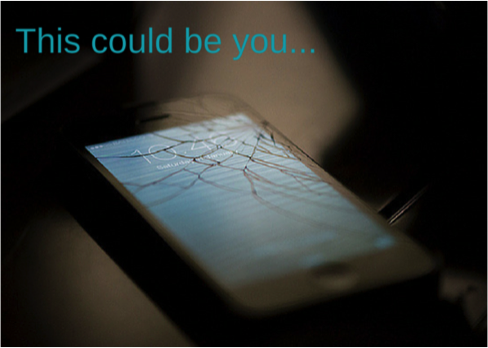 When your phone is heading toward death’s door, what is the best move to prevent a broken iPhone screen? Gazelle Labs set out to find the answer.

Cracked screens lead to not only unsightly cosmetic issues, but also minor cuts and injuries. The analysts at Gazelle Labs wanted to find the best preventions for cracked screens altogether. In our experiment, we dropped nearly 50 iPhones at three different heights – a one-foot, three-foot and five-foot drop – to test the strength of the screen and simulate the standard distances a phone could fall if it escapes your hand near the ground, at pocket level or at ear level. We evaluated the three most likely places the phone would land: on its base, on the front glass or on its back. Each smartphone was dropped onto a laminate wooden floor. Once a phone showed the slightest crack on its front screen, it was deemed broken.

Lesson 1: It’s All in the Hands

You have the best chance to save your screen if you can nudge your iPhone to land on its base. By falling on the base of the phone – where the speakers are located right beneath the home button – the metal casing is able to absorb some of the collision shock. In our tests, 7% of phones dropped on its base ended up with a cracked screen versus a combined 27% for phones that landed on its front or backside.

A few inches makes a difference, but our findings weren’t largely what you would expect. None of the phones that fell one-foot off the ground ended up broken, and about 20% of those dropped from three-feet (around pocket height) developed a bad case of broken glass. However, that figure dropped to only 13% when we increased elevation to five-feet.

Though not originally anticipated, the results from shifts in height may be due to a tendency we observed: as phones fell from higher heights, they were less likely to land flat on their screens or backs. Air resistance (or our own slightly unsteady hands) managed to tilt the phones marginally as they fell, causing the metal casing on the phone to come into contact with the ground first, absorbing some of the shocks and relieving the glass fronts and backs from significant damage.

So, What Can You Do?

Rule #1: Disrupt the fall to prevent the phone from falling on its front. That way, the back and frame will take on some of the pressure and will slow its pace as it plummets… Anything to prevent a broken iPhone screen.

Rule #2: Protect it. Invest in a screen protector and case, which can lessen the hard impact on a hard surface. We’ll be testing cases soon – stay tuned!

If you’re looking at shattered glass when you send your next text, all is not lost. Buying a Gazelle Certified pre-owned smartphone is a low-cost option, backed with a 30-day guarantee (click here to learn more.) You can also trade in your smartphone too, even shattered, for cash.